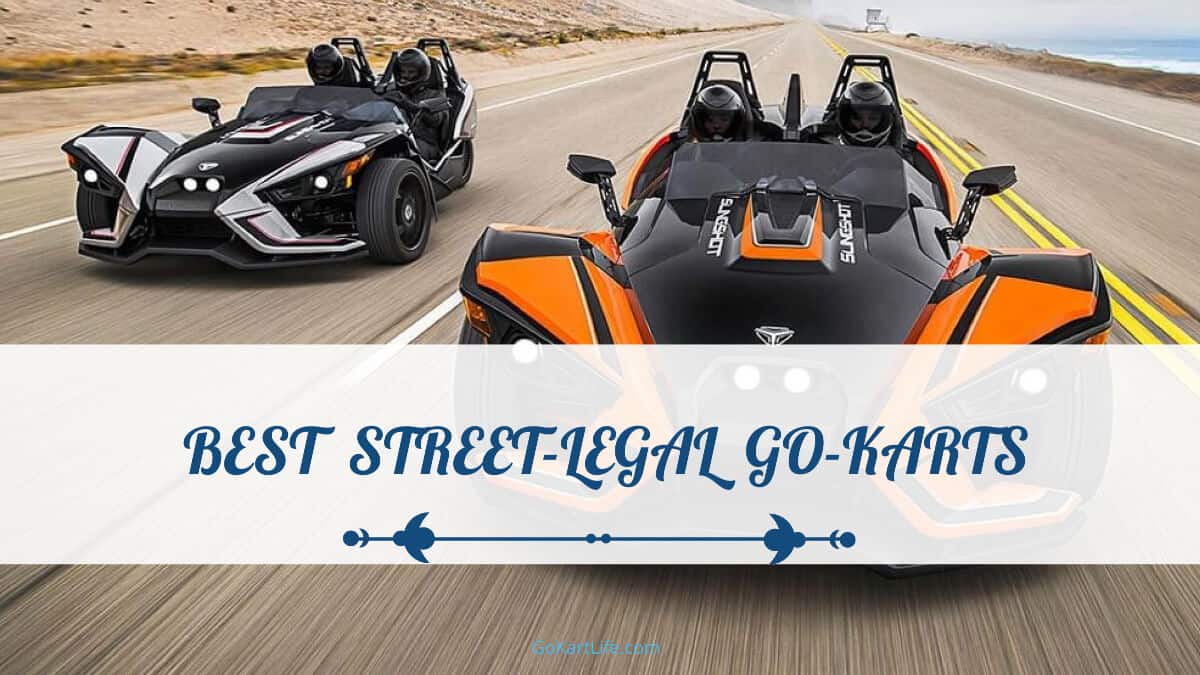 When you think about a car, you think of your typical compact car, sedan, or SUV. But there are other types of vehicles that you might be interested in if you are looking for a little extra fun on the road.

These light, high-powered vehicles, stripped down of much of what you can find in a regular car (radio, AC, safety features), are sometimes referred to as motorcycle alternatives, exocars, trikes, etc. Nevertheless, for this article, we will call them go-karts.

Today, we will talk about the twelve best street-legal go-karts you can buy at your local car showroom.

We will cover the following street-legal go-karts:

Let’s start with the cheapest go-kart on the list, Polaris Slingshot Grand Touring LE. This vehicle will make you feel special, not just because of its uniqueness and luxury but also because there are less than 300 of them made globally. And with a base price of just under 34k, Polaris Slingshot is one of a kind three-wheel bullet that has the potential to make you money in the long run.

Polaris is one of the least powerful cars on this list, with 203 bhp and 144 pounds of torque produced by GM Ecotec 2.4L DOHC 4 Cylinder engine. Zero to 60 mph time is also not that impressive, considering it only weighs 1,640 lbs, but at 4.9 seconds is not all bad at all compared to your regular cars. A top speed of 124 mph is also not something to brag about but do you need to go faster than that?

There are other trim levels that Polaris comes in, S, SL, SLR, and Grand Touring. If you do not want to spend 35 grand on the LE or cannot get your hand on one because no one can, you can buy Polaris S for as low as $20,999.

And in case you are wondering, Polaris does not come with an airbag. For that reason, some states might require you to wear a helmet.

Next on the list is Caterham Seven 360, and I consider it more of a go-kart than Polaris for the simple fact that it has four wheels. Its naturally aspired Ford Duratec 1999cc 4-cylinder engine produces 182 bhp with 194 lbs of torque. It is less powerful than Polaris, but it weighs an incredible 400 lbs less. At 1,235 pounds, it is the second lightest vehicle on the list.

You would think that a car that weighs that little would be incredibly fast, but that’s just not the case. It takes 4.8 seconds for Caterham to get to 60 mph, barely beating Polaris. And considering it can only hit 130 mph, I wonder if the base price of $43,500 is justified.

Another three-wheel two-seater vehicle on the list sports a smaller engine than the previous two, yet 0-60 time is only 4.5 seconds. 1.5 L inline Turbo 16 DOHC engine produces 194 bhp and 203 lb-ft of torque.

To justify the base price of $46,950, the manufacturer has included luxurious features, such as heated seats, a Bluetooth enabled sound system, and a wooden steering wheel.

Retro people might enjoy the look of Vanderhall Roadster, but to me, this car is probably towards the bottom of the list of the most handsome looking cars here. I think only the next car can match its “beauty.”

I know that personal taste is just that, personal, but this is by far the least attractive vehicle on the list. It reminds me of a frog for some reason. Probably because of those hideous headlights.

Considering that it has BMW 1649CC inline six-cylinder engine under the hood, you would expect higher horsepower and torque numbers. It only has 160 bhp and 129 pounds-feet of torque. That, however, is not reflected in the performance of the car.

Campagna T-REX 16SP is the lightest go-kart, weighing only 1,157 pounds, which allows this three-wheeler to reach 60 mph in 3.9 seconds and achieve the top speed of 130 mph. We are approaching supercar speeds, and I guess that is the only way to justify a steep base price of $65,999.

In my opinion, Ariel Atom 4 takes the cake when it comes to the value and fun factor. Ariel Atom 4 is a genuine legal go-kart, that if it weren’t for its shape, would be considered a hypercar.

Why do I say that?

This American built, formula-style car has the biggest engine on this list, 6.2L Chevrolet E-Rod LS3 naturally aspirated V8. This engine produces the most amount horsepower, 430 bhp, and torque, 424 lbs. The maximum speed you can expect to reach is 165 mph, and it will take you 3.2 seconds to get from 0-60 mph.

The downside of the V8 engine is its weight. Even though Drakan Spyder has a lightweight fiberglass body, it still weighs 2,000 pounds. That is quite a bit more than most other cars on the list. That extra weight can also be due to the fact that this car was built for comfort as well, not just speed like most other cars on this list.

The price? As low as 100k. Not too bad for a comfortable and reliable sports car.

Remember how I said that Ariel Atom 4 takes the cake for the value and fun factor? Well, Ariel Atom 3RS is as much fun, if not more, but it comes at the steeper price of $119,995. Not too shabby for a go-kart.

Ariel Atom 3RS is a bit less agile than its cheaper brother because it weighs 1,450 lbs, but it is by far more powerful. Turbocharged 2.4L Honda 6-speed manual transmission engine produces 425 bhp and 365 lb-ft of torque, with a top speed of only 155 mph.

But who needs top speed when you can get to 60 mph in 2.5 seconds. You are almost sure to win a drag race against anyone, even motorcycles, and that makes it the fastest street-legal go-kart on this list.

At first, I thought I would omit Elemental RP1 from the legal go-karts list because it looks more like a roadster, but I included it because it is so cool looking. Unlike the “frog wheeler” up above, elemental RP1 backside screams Ferrari, by far my favorite car.

The performance also resembles the one you could expect to get if you bought a Ferrari. Zero to 60 in 2.7 seconds; 320 bhp and 325 lb-ft of torque; top speed of 170 mph. This 1995cc 16v 4-cyl turbocharged engine can do it all and deserves the fastest legal go-karts’ second-place tie.

KTM X-Bow GT pronounced KTM CrossBow GT is the two-seater sports car made in Austria. X-Box GT is the closest you will get to a bike on 4 wheels, and that is because KTM company is mainly focused on making motorcycles.

What separates X-Bow from mostly anything on the market is the way it is built. The carbon fiber body is built in a way that exposes a lot of the inner parts of the vehicle, including its engine and suspension. As a driver, you can actually see the suspension coils expanding and contracting when adjusting to bumps on the road.

I dare you to pronounce Donkervoort D8 GTO-RS three times quickly; I can bet my house you won’t be able to do it. The Dutch really challenge you with their names something.

What is amazing about this car is the way it is built. Almost everything is made out of carbon fiber. The doors weigh about 2 pounds, the same goes for the two seats, and a waterproof fabric covers the back storage compartment. All these extra savings add up to a total car weight of about 1,532 lbs.

If you like a retro yet modern look, Donkervoort D8 GTO-RS might be the car for you. The design of this two-seater is definitely going to turn heads.

This insane single-seater is the closest you can get to owning a true street-legal race car. It will propel you from 0-60 mph in just 2.7 seconds, offering incredible performance in a straight line. Mountune-sourced 2.3-liter, four-cylinder engine puts out 332 bhp and 295 pounds of torque, with a top speed of 170 mph.

Because it is so low to the ground and its design, the cornering capabilities of BAC Mono are unmatched by everything you will encounter on the road. At 1,257 pounds, it is one of the lightest cars on the list and is incredibly enjoyable to drive. If I had $250,000 to spend, BAC Mono would be one of the go-karts I would consider buying.

Among many positives, including Formula 1 inspired cockpit, suspension, removable steering wheel, and a custom seat, BAC Mono has one negative aspect that bothers me. It is deafening. Yes, we all love the sound of a screaming engine, but not to the point of losing your hearing. Earplugs are definitely recommended with BAC Mono.

There you have it, guys; these are the craziest street-legal cars, in my opinion. Some of them are affordable, and some of them not so much. If you can’t buy one, maybe you can go a different route and make your own go-kart street legal. Read all about it at my guide How to Make a Go-Kart Street Legal – 2021 Guide