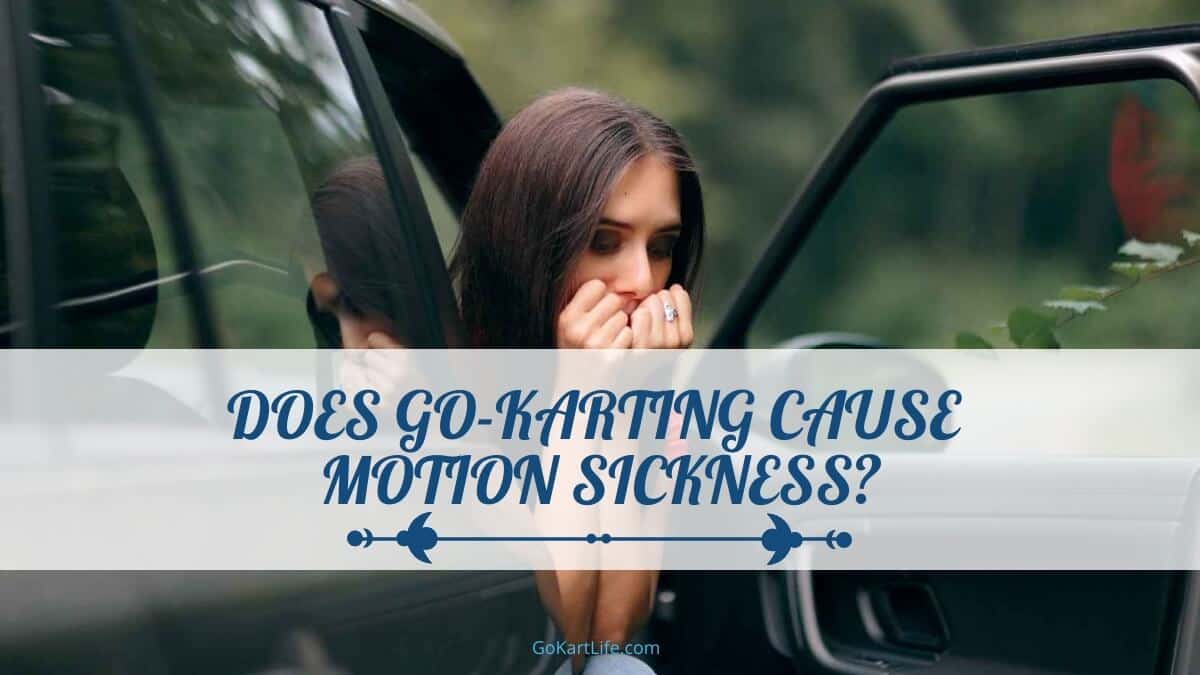 If you ever wanted to get the feel of being a racecar driver without the dangers of going 200 miles per hour, go-karting is probably the next best thing.

The karts can reach surprisingly fast speeds, and there is such a variety in tracks that no one race is the same as before. With all of that speed and turning, though, there are still some potential risks, including motion sickness.

Like any driving, if you are prone to motion sickness, go-karting will almost certainly trigger it. Also, if you are go-karting indoors, there is an additional risk of breathing fumes from the karts, leading to illness.

But, even if you are prone to motion sickness, there are ways to help cope with the feeling. Some methods include taking certain medicines, which do not mix well with driving a go-kart. However, there are other, more natural ways to deal with motion sickness so that you have a chance to get back out on the track.

Can You Get Motion Sickness Go-Karting?

It is possible to get motion sickness while go-karting. Like regular driving, go-karting can confuse the brain into thinking it sees one thing when another thing is visible.

With these two factors in mind, there is no denying that if combined, they can cause motion sickness.

However, this does not mean that every person who goes go-karting will get the feeling of motion sickness. As you will see later in this article, motion sickness can vary from person to person.

Motion sickness is the feeling you get when your brain is computing, and what you are seeing does not match up.

Dr. Steven Rauch, the Medical Director at the Massachusetts Eye and Ear Balance and Vestibular Center, in an interview, defines the feeling of motion sickness as:

‘“[When] all that input converges in the balance center in the brain, where the brain compares those signals to see if they agree.” (Source: Self)

When you’re in a situation where your eyes don’t register movement, but your inner ears do (or vice versa), your brain receives conflicting signals and can’t make sense of it. According to Dr. Rauch, this sensory conflict leads to motion sickness.

In layman’s terms, what you are seeing doesn’t quite match up with what your brain thinks it is seeing. As a result, your mind believes the body is falling or has the potential to fall, which then triggers the feeling of motion sickness.

However, there is no real reason why the feeling people get from this phenomenon results in sickness or nausea.

A couple of scientists theorize that it stems from our ancestors and the human reaction to eating something poisonous. The evolutional theory says that when our ancestors were hunter-gatherers if they were to eat something toxic, their body’s response was to throw up to rid the body of the toxins.

In the present day, this could be the reasoning behind why when we get dizzy; some people tend to vomit. Neurologists have also pointed out that nerves connect the balance system of the brain to the vomit/diarrhea center of the brain, which can explain the reaction.

Why Do Only Some People Get Motion Sickness?

If you dread long car trips because you have motion sickness, you are not alone. Whether you are driving or just a passenger, motion sickness can hit anyone at any point. But, some people do not feel the effects as much as others do.

Some scientists believe motion sickness can be passed along down the family tree, so if your parents or grandparents get motion sickness, there is a good chance you will as well.

Generally speaking, anyone with a fully-functional inner ear can get motion sickness. The most significant factor on whether you get it, though, is in how your brain is wired.

Along with this, those who suffer from migraine headaches are also more prone to motion sickness. And women are more likely than men to get the feeling of motion sickness.

Ways to Deal with Motion Sickness While Go-Karting

If you are someone who has dealt with motion sickness for a long time, chances are you have tried just about everything to help deal with the feeling beyond go-karting. On long car rides, you avoid reading or looking at a screen for too long, or you have tried medications that have reviews saying they will help.

The military and NASA have been training their pilots and astronauts on how to deal with motion sickness. However, this type of training is not available to the general public, mostly because it is expensive and can be dangerous to those not adequately prepared.

What you do while go-karting is an entirely different form of motion compared to what you would do in the military or space.

But don’t worry; there are still plenty of other options to deal with motion sickness, not just while go-karting, but in everyday practice, too.

Motion sickness is a feeling that almost everyone will get in his or her lifetime. Numerous things can cause it, and there is not much that people can do to deal with the feeling or try to reverse it.

Go-karting can trigger motion sickness if a person is not prepared for the high speeds and winding turns that come along with the activity.

Remember, motion sickness is caused when whatever the person sees does not match what their brain is computing. Go-karting, with the twists and turns, can quickly induce the feeling.

Dealing with motion sickness can be difficult, but there are ways to do it while still enjoying your favorite activity. However, be wary of medications you take because the last thing you want is to feel drowsy while racing around the tracks.