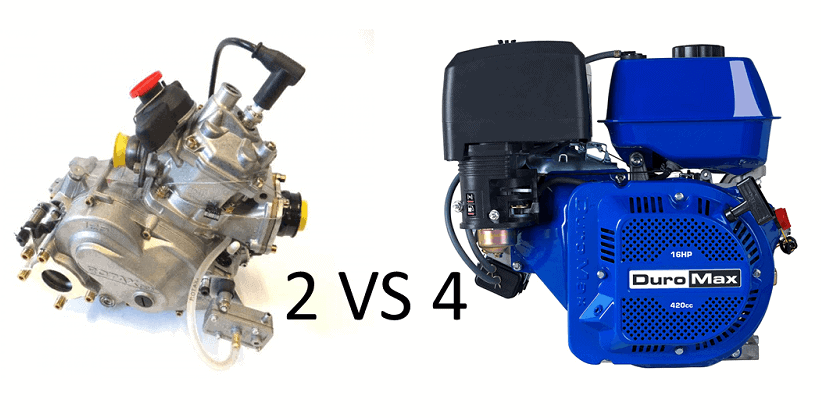 In go-kart racing, two different engine types are used, 2-stroke and 4-stroke engines. Each engine has its advantages and disadvantages. In this article, I will explain how each engine works, its pros and cons, and which engine is better depending on the use.

What Is A Stroke?

The main difference between these two engines is in applying the strokes, so let’s talk about how each engine works before comparing them in detail, so you can decide which type of engine suits you better.

The 2-strokes are smaller and less complex, with a greater power-to-weight ratio than their bigger brothers, the 4-stroke. They are mainly used in sprint racing and require less maintenance.

The way the 2-stroke engine works is as follows:

Pros of a 2-Stroke Engine

Cons of a 2-Stroke Engine

The 4-stroke engines are robust, complex, and high-maintenance, built to perform during long races. They are more efficient and will last longer than 2-stroke engines.

The way the 4-stroke engine works is as follows:

Pros of a 4-Stroke Engine

Cons of a 4-Stroke Engine

To summarize the difference between the two types of engines, let us compare them side by side in each of the following categories: weight, durability, power, maintenance, and environment.

The difference in weight between 2-stoke and 4-stroke engines is significant due to the size and parts that make up these two engines. While the 2-stroke is relatively simple and contains only a few parts, the 4-stroke can get quite complex and has twice as many parts, adding to the weight. Because of the extra weight, 4-stroke is not great for short, sprint races, but it will outperform 2-stroke if the race is long.

If appropriately maintained, a four-stroke engine will outlast a two-stroke engine because the combustion inside a 4-stroke engine is not as strong, thus putting less pressure on the engine components.

For an untrained eye, it is easy to confuse power with the number of strokes. The truth is that even the basic two-stroke engine creates more power than a four-stroke engine, delivering that power to the wheels quicker. This is one of the reasons why dirt bikes and motorcycles use 2-stroke engines.

Maintaining a 4-stroke engine can get quite complex, and if you are not a mechanic or don’t know your way around engines, make sure you go with the 2-stroke. Additionally, the complexity of the engine correlates with the parts needed for it to work properly. The more parts you need, the more money you will spend on maintenance.

You would think that because a 2-stroke engine had stronger combustion, it is more environmentally friendly, but that is not the case. The 4-stroke engine is by far more efficient and uses far less fuel.

So, if you want to help the environment by reducing exhaust gases while still enjoying racing, make sure you go with the 4-stroke engine.

In the world of go-kart racing, the two most commonly employed engines are the 2-stroke and 4-stroke. The 2-stroke engine, known for its lightweight design, potent power output, and minimal upkeep, also has drawbacks such as decreased sturdiness, heightened fuel consumption, and elevated emissions.

On the other hand, the 4-stroke engine, with its increased durability, fuel efficiency, and reduced noise and vibration, also has its limitations, such as its larger size, greater weight, and more demanding maintenance needs.

Ultimately, the engine choice for racing relies on the race’s specifics, with the 2-stroke engine being best for short, energetic sprints and the 4-stroke engine shining in long races.

As a go-kart racer seeking to advance to the next level, acquiring the proper equipment is of utmost importance. A quality pair of karting shoes is essential for a successful racing experience. Often...

Continue Reading
link to Go-Kart Racing Etiquette: How to be a Good Sport on the Track