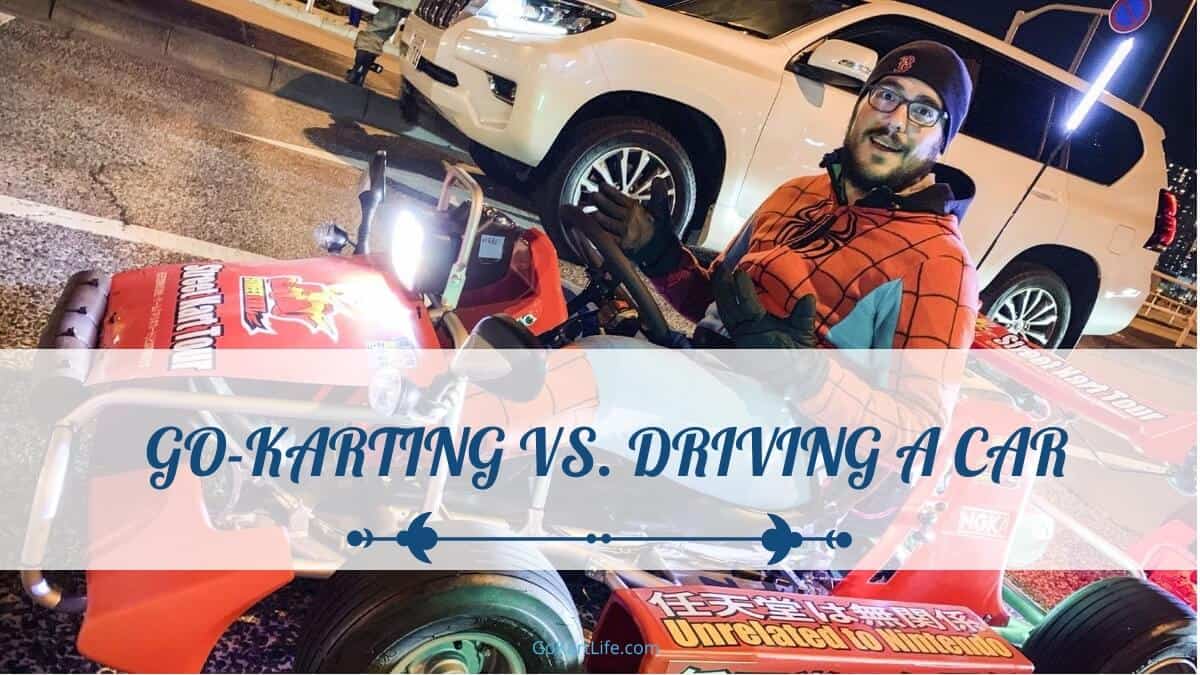 When you were younger, did you ever drive a go-kart and wonder if you had what it took to drive a car? Did you wonder if the experience was the same? Now that we’re older, most of us know there is a substantial difference between the two. But what’s the difference?

Go-karts and cars are similar in the sense that they both have four wheels and an engine. However, go-karts are generally accepted as more of a popular theme park activity, designed to be a performance vehicle for racing. In contrast, cars are designed with safe commuting and practicality in mind.

So, we know that cars are a more suitable machine for commute and travel, but how do they drive compared to go-karts? In the remainder of this article, we’ll explore these differences.

Go-Karts Are Made for Speed & Racing

One of the main differences between cars and go-karts is their purpose. Unlike a car that can fill various functions and roles relative to your traveling needs, a kart is only used for racing and recreational use. Even theme park level go-karts are designed to be raced against each other. Go-karts also operate without a lot of the extra features you’d usually miss in a car:

Cars Have a Higher Brake Sensitivity

The main difference when using brakes in a kart versus a car is that most drivers will release the brake to make a successful turn in a kart. Karts have tail brakes (brakes in the rear), while most cars have front and back brakes.

Differences in Braking While Turning

When driving a go-kart, the ideal way to tackle a corner is to start with the brake early and then release it to aid in the turn. Karts also have Solid Rear Axles. This means that the speed of one wheel is going to affect the speed of its counterpart.

Because of this, when the brakes are utilized in a kart, the vehicle is forced into a straight line. You must release the brake to complete a corner or turn efficiently. In kart racing, mastering this point of release is key to improving as a racer.

On the other hand, cars don’t all have solid rear axles; in fact, nearly all new models don’t. They instead have Independent Rear Suspension. This means that each wheel can move independently of one another, which gives drivers more control over their vehicles and lessens the chances of rolling due to uneven roads or bumps.

A Note on Solid Rear Axels

While many drivers still utilize solid rear axles on their cars, there is an added danger to rolling that isn’t as prevalent in go-karts. Because of the go-karts’ low center of gravity and its flexible frame, the likelihood of it flipping is mitigated despite its solid rear axle.

In a car, however, the center of gravity is higher. Thus is if one wheel is lifted off the ground by a bump or an uneven road, the risk of losing control or even rolling is heightened, as the lifted wheel will still affect its counterpart, unlike when using an Independent Rear Suspension.

This difference in axle may come as a shock to kart drivers transitioning to cars, but not as much as the front brakes. The addition of front brakes changes the way a driver must turn in a standard vehicle. Instead of timing a complete release of a break to maximize turns, they must instead perform what is called a “trailing brake.”

A trailing brake is a technique in which the car driver applies their brakes and then gradually releases it as they turn a corner. If a transitioning kart driver fails to perform a trailing brake when taking a corner and instead relies on releasing the brake like he/she might be accustomed to, he will cause his vehicle to under turn.

Most go-karts aren’t street legal; this will vary from state to state, but generally, go-karts don’t meet general safety standards to be acceptable for regular road driving.

For example, many go-karts don’t come equipped with:

Plus, their low center of gravity makes them hard to spot for other drivers on the street.

However, it’s worth noting that you can make a go-kart street-legal in some states, or at least suitable to drive on streets or in neighborhoods with speed limits at or under 35 miles per hour.

Are There Any Similarities Between Karting vs. Driving?

As you can see, there are some apparent differences between driving a kart versus a standard car. However, track navigation skills and spatial awareness honed while in a kart can still transfer over into cars, at least to a degree.

For example, oval karts are actually designed to mimic the one-way turns a classic race car would make when racing on a speedway or track. But when driving in a straight line, there isn’t much difference between the two vehicles. The main difference in handling arises when corners or turns are thrown into the mix.

Most older muscle cars sport solid rear axles, just like go-karts. These axles are great for vehicles that carry most of their weight in the machine’s front and are best when traveling in a straight line.

In general, a transitioning kart driver could feel more comfortable using one of these vehicles or a newer model that has been converted to have a solid rear axle.

The truth is that while go-karts and cars handle and feel very different from one another, most professional race car drivers got their start racing go-karts! So there must be some level of skill cross over between the two vehicles.

In the end, when choosing a ride, it all comes down to what you’re drawn to more and what your budget or time investment can handle. While go-karts have a much lower barrier to entry in both age and money, while growing, the sport itself isn’t nearly to the level that traditional racecar driving is at.

If money isn’t an issue, it may be worth your time to devote yourself to racing cars right off the bat so as not to miss a beat when developing your skills. However, you can always do what the pros like Ayrton Senna and Jeff Gordon did and do both!

As a go-kart racer seeking to advance to the next level, acquiring the proper equipment is of utmost importance. A quality pair of karting shoes is essential for a successful racing experience. Often...

Continue Reading
link to Go-Kart Racing Etiquette: How to be a Good Sport on the Track