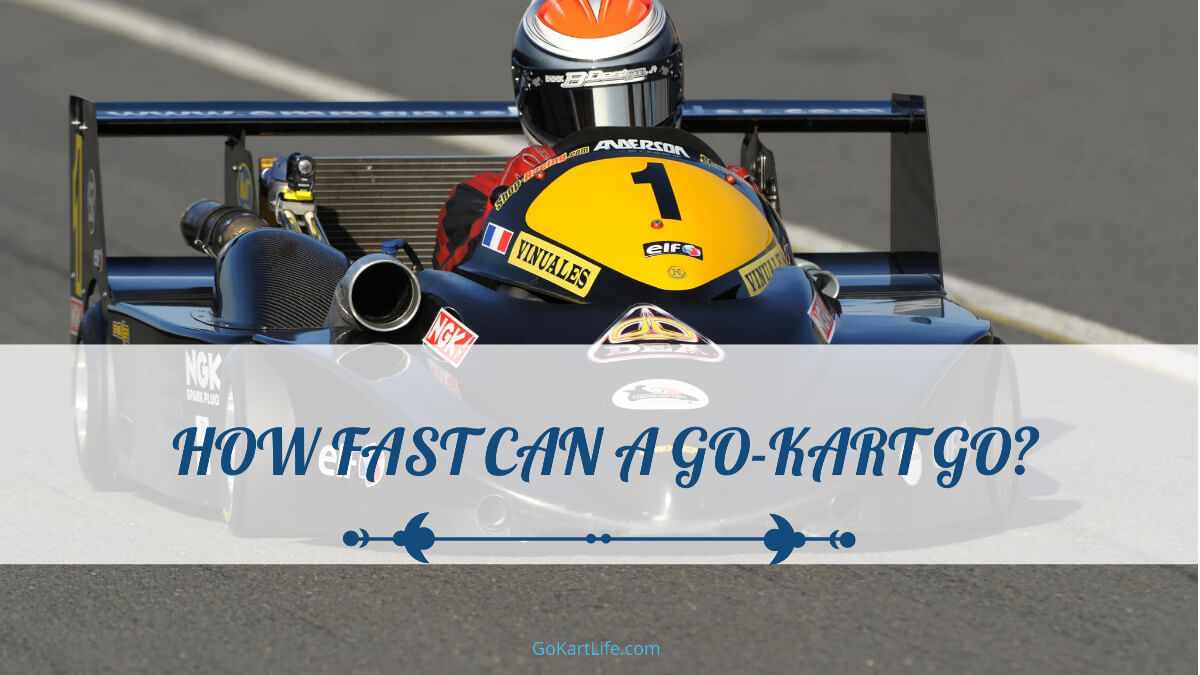 The dream of being a professional racecar driver may seem out of reach for many of us. However, the speed, competition, and adrenaline we crave are not as far out of reach as expected. Thanks to go-karting, zipping around a race track in your free time is possible. But how fast can a go-kart go?

Go-Karts vary in speed depending on their engine classifications, from 50cc up to 250cc. 50cc is primarily for kid kart racing, and karts in this class will not exceed 30 mph but are often limited further for safety. The fastest go-kart is the Daymak C5 Blast which goes from 0 to 60 miles per hour in 1.5 seconds.

As you can see, a wide range is available, and your experience will differ depending on what kind of go-karting you are participating in. Read on to learn more about the speed and excitement of driving these fantastic vehicles!

How Fast are Different Classes of Go-Karts

Eight generally accepted classes of go-kart racing differ primarily based on the participants’ age, engine brand, and racing experience level. While occasional outliers may not be part of these eight categories, they are usually created by augmenting karts of an existing class to make a hybrid.

It’s worth noting that go-kart racing classes are divided by age and engine class to create a more level playing field for everyone competing. The drivers’ experience makes sub-divisions within each class and exists to facilitate the most consistent experience for everyone.

This class is the starting point for the youngest drivers who want to participate in go-karting and learn the basics. Designed for kids between ages 5-7 and utilizing a restricted 50cc 2-stroke engine, go-karts in this class cannot go above 30 mph because of the priority on safety and learning.

The next step up for kids ages 7-12, the cadet class is similar to its predecessor but is subdivided into the Micro and Mini categories for ages 7-9 and 9-12, respectively. A specific caded-sized chassis is designed for this class, and go-kart engine manufacturers have named the engines Micro or Mini to correspond to the subclasses listed above. These engines achieve a maximum speed of 50 and 60 mph each.

Although this class was initially designed for kids between the ages of 12-15, it is also an excellent entry point for adults who are just beginning their go-karting journey. The junior karts use 100cc 2-stroke engines that achieve reasonably high speeds without being overly expensive, making this a popular category for many aspiring go-kart enthusiasts.

This class is relatively new but is quickly gaining popularity in the United States because of its competitive nature. Notably, this class uses 4-stroke engines designed by Briggs and Stratton to achieve approximately 60-70 mph speeds. This class has subcategories of junior, senior, and master based on age and experience.

This class is the most competitive and one of the most popular classes as it offers a lot to drivers of varying experience levels. The 125cc 2-stroke engine used in this class can reach top speeds between 70-80 mph. Participants include kids aged 12-15, adults, and junior and senior subdivisions to level the playing field. Some karting clubs split the subclasses based on experience to create a fair environment, but they are not required to do so.

Despite having the same engine size as the previous class and being accessible to drivers over the age of 15, it is not made for beginners. Karts in this class can reach top speeds of 115 mph on sprint tracks, and participating drivers must be at an intermediate or advanced level.

This class is for drivers aged 32 and above that utilize the unusual 150cc engine, split between heavy and light divisions based on minimum weight variations.

As the name suggests, this class is much faster than the others and requires experienced drivers as the Superkarts can reach top speeds of 140 mph. Races in this class are incredibly competitive and are often used as a pathway into professional racing.

How Fast are Indoor Karts

Indoor go-kart tracks feature electric motors that generally do not go above 50 mph for adult karts and are limited to 25 mph for junior-sized karts. Indoor go-karting tends to be somewhat slower than outdoor events because indoor tracks almost always have less space to work with than outdoor tracks, and these tracks are often full of winding turns and hairpin corners. These changes mean that the karts can’t achieve top speeds quickly due to the lack of space available.

Ultimately, each indoor track is different and heavily depends on the event’s organization. Some indoor courses may allow racers to reach significant speeds if their rules and regulations allow it.

Despite the widespread belief that gasoline-powered vehicles are faster than electric, the opposite is true. Electric go-karts are significantly quicker than gas-powered go-karts, especially in terms of acceleration, and are considerably safer at the same time.

The speed difference is that the acceleration of gas engines is limited before it reaches what is referred to as the power band. This term describes the optimal revolutions per minute, or RPM, needed to provide torque that results in the kart moving forward.

Electric engines provide instantaneous torque, which means that racers using an electric-powered go-kart will achieve maximum power and speed as soon as they press the throttle.

What is the Fastest Go-Kart

In what may be surprising news to some, the fastest go-kart in the world is available for purchase and is made to order for those who can afford its $60,000 price tag. Built by Canadian manufacturer Daymak, the C-5 Blast Ultimate speed demon lives up to its name by achieving 0-60 mph in 1.5 seconds.

This incredible machine is powered by a 24 kWh lithium-ion battery, which handles the 48-volt brushless DC motor, and manages the 12 Electric Ducted Fan (EDF) motors, each driven by its own 5000mAh battery that provide this robust go-kart with its outrageous acceleration.

While the acceleration of the C-5 Blast Ultimate is widely known, the potential top speed of this explosive go-kart has yet to be completely determined. Additionally, Daymak has a significantly cheaper version of this go-kart, named the C-5 Blast Standard, available for one-sixth of its more powerful sibling.

While the C-5 Blast Standard’s acceleration time is technically much slower at 3.9-seconds than the Ultimate’s 1.5, it is still much faster than most readily available go-karts in today’s market.

Whether you are a casual enthusiast, an amateur, or a professional racer, go-karts are one of the most entertaining and accessible ways to get on a track and put your skills to the test. With so many clubs and organizations contributing to the incredible events put on for this motorsport, there has never been a better time to invest in a kart and take part in what may become your new favorite activity!